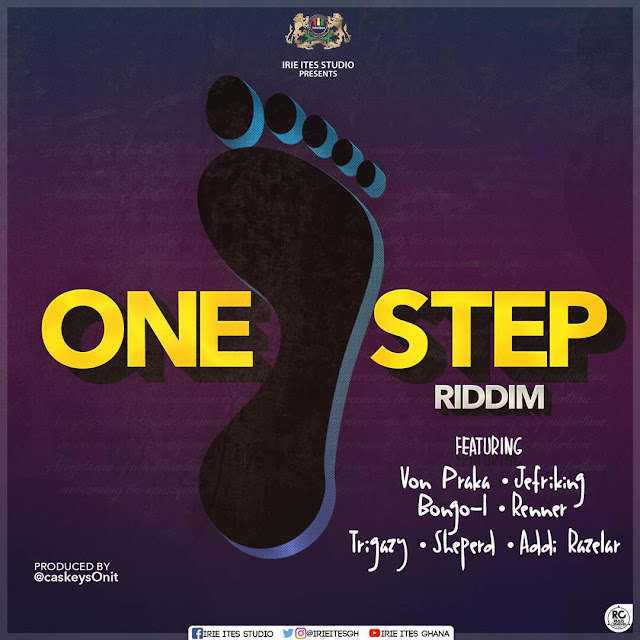 Irie Ites Studio is closing the year with its final various artiste album project: the “One Step Riddim” album which is scheduled for release Saturday, November 24.
The “One Step Riddim” album is a 7 track project housing songs from Renner, Trigarzy, Bongo I, Von Praka, Jefri  king, Razelar and Shepherd.
Below is the complete traclklist of the “One Step Riddim” album
RENNER – The System
TRIGARZY  – Touch You [Featuring Mz Freeze]
BONGO I – Bad Gyal
VON PRAKA – Copy Cat
JEFFRI KING – Sellout
MADRAS [RAZELAR] – Judas
SHEPHERD – Grind
It’s a truly tasty dancehall album, though the tracklist is not packed with more songs, yet the cute lyrical variety it brings can elevate the listener’s pleasure to a high musical ecstasy. Each song is a danceable big jam and comes with a warm reviving wave capable of sparking a dull club into a hot revelry.
Renner [the only female artiste with a full solo appearance on the album] opens her version with a fervent invocation for God’s divine intervention where she cries “Oh Jah, come down…..come down”,  — an opener that gives her listener a quick clue that her next lines are addressing a wild life reality. Yes, “The System” laments the woes of the underground artistes. Renner points out the industry’s painful shun towards promising talents that the system has denied needed assistance.
Trigarzy and Bongo I take it from the lovey-lovey side, but with a little bit of contrast. While Bongo I is happily praising her girlfriend’s badness superiority over the other girls in the hood by saying “Mi gyal ah di baddest”, Trigarzy is struggling to get a wild night’s romance treat from Mz Freeze.  No matter how hard Trig tries to touch Freeze, she keeps flinching her body away from his hungry grip. “Can’t touch me tonight”, Mz Freeze disappointingly tells Trigarzy.
Sort of coincidence, Jefri King and Madras Madras [Razelar] chose to keep their content to a loyalty concept by bashing up pretentious friends who claim loyal but never show true solidarity to their social circles. Razelar says they enter the circle as disciples, but he knows very well that they are “Judas” – just coming in to later betray the circle. Jefri quickly puts out a loyalty validation challenge; “See seh you never real, you sell out, you sell out your real friend dem”, he unveils a fake friend’s circle disloyalty right there.
Up against lyric thievery,  PrakaNation’s angry Von Praka pours out his indignation on his lazy colleague artistes who seek artistic comfort by impersonating their Jamaican dancehall mentors instead of working hard to discover their own originality to build it up. Von’s “Copy Cat” will anger you if you are that artiste who steals used lyrics from your mentors. In “Grind”, Shepherd warns “If ah neva money, no badda call mi”, telling us that he doesn’t tolerate idle chat on his focused quest towards the big money bags. That’s exactly what most hot-head hustlers going for the bucks will tell you when they pick your call.
Comparing Irie Ites Studio’s last two projects, if its “Bad Edge Riddim” album, [the previous release] was judged GOOD, its “One Step Riddim” album will be judged as BETTER — obviously a demonstration of production progress.
Anticipate the release of the “One Step Riddim” mixtape Saturday November 24 prior the official release of the album’s individual songs a few days after.