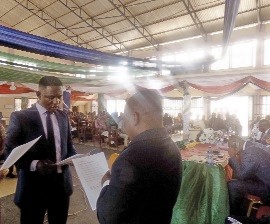 The West Akyem Municipal Assembly in the Eastern Region failed to elect a presiding member after three rounds of voting at Asamankese last Thursday.

None of the two contestants, Mr Joseph Kwasi Baah Yirenkyi, the incumbent presiding member and Mr David Apekyi, the West Akyem Constituency Organiser of the New Patriotic Party (NPP), secured two-thirds of the 48 votes cast at the ceremony.

Cardi B says she is suffering from ‘Kaka’

‘I took my COVID-19 to some registration centres but I was careful’ – Deputy Minister of Trade and Industries, Carlos...

We underestimate Covid-19 danger at our own risk – Rawlings