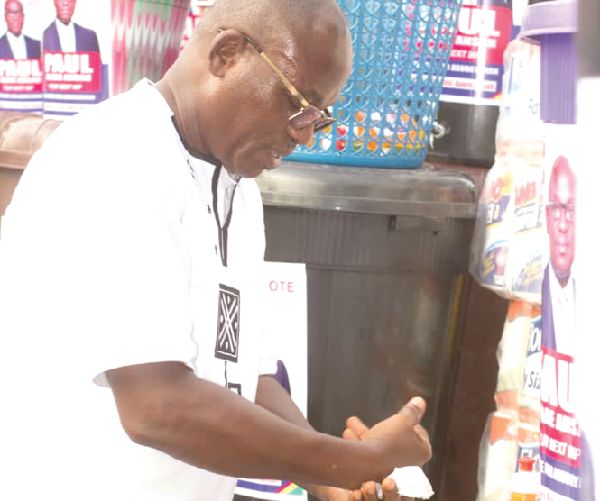 The New Patriotic Party parliamentary candidate for Asuogyaman, Mr Paul Asare Ansah, has presented 200 sets of handwashing items to all the 54 communities within the 27 electoral areas in the Asuogyaman District in the Eastern Region.

The items, which were distributed over a three-day period, included Veronica buckets, liquid soap and gallons of sanitisers.

Mr Ansah, who is a former Director-General of the Ghana Ports and Harbours Authority (GPHA), funded the provision of the items at a cost of GH¢37,400.

The beneficiaries included market women at Akosombo, Atimpoku and the Ghana Private Road Transport Unions within the district.

Commenting at all the communities, markets and all the other places during the distribution, Mr Ansah, who is the Technical Advisor for the Ministry of Transport, said the war on the COVID-19 pandemic could not be fought by the government alone but required the support of all.

“I want us as a people in the Asuogyaman and Ghana as a whole to chase the virus out entirely, provided we can take all the precautionary measures the Ghana Health Service (GHS) and World Health Organisation (WHO) have put in place,” he emphasised.

In all the communities where the items were distributed, Mr Ansah demonstrated hand washing with soap and the use of sanitisers, as well as the elbow-to-elbow handshake to the admiration of the people.

The Leader of the Akosombo Market Traders Association, Madam Agnes Mercy Carr, thanked Mr Ansah on behalf of the traders, as well as the Atimpoku Abolo Sellers and Atimpoku Yam Sellers.

The Chief of Aboasa, Nana Obourpong II, urged all the people in the community and Asuogyaman to regularly observe the prescribed measures.