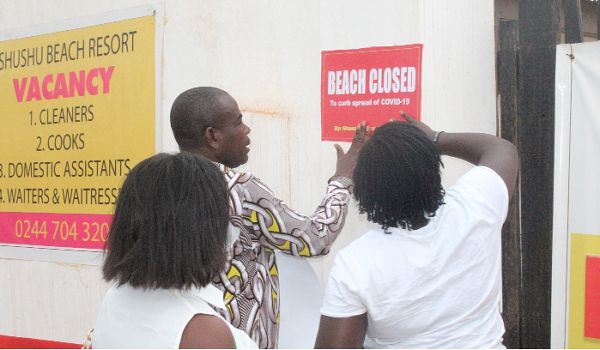 The Ghana Tourism Authority (GTA) has closed down some major beaches in Accra to ensure enforcement of the ban on social gathering directive.

They are the La Pleasure Beach Resort and Laboma Beach at Labadi, Shining Beach and Shushu Beach at Nungua, Titanic Beach at Sakumono as well as some other beaches at Korle Gonno.

This was in alignment with the President’s directive on social gathering and social distancing to help reduce the spread of COVID-19 in the country.

The close down was announced during an inspection tour by the authority to check on the preventive measures the beaches had put in place.

The team was led by the Chief Executive Officer (CEO) of the GTA, Mr Akwasi Agyemang, together with other officials of the authority.

They posted notices with an inscription “Beach Closed to Curb Spread of COVID-19” at the entrances of the various beaches as warning to revellers who might still want to mass-up at the place.

They also went ahead and educated the beach operators about the outbreak and the preventive measures they could put in place to avoid the spread in their facilities.

It was observed that the usual hustle and bustle had lessened at the beaches during the tour.

However, they had still not put up any measures to reduce the numbers that thronged the place, while the preventive measures were also being ignored.

Mr Agyemang stated that the operation had become necessary due to the increase in the spread, stating that “currently, Ghana has recorded 68 cases, this is not something we have to joke with, this is the time we have to go all out and ensure that people adhere to the safety advice by health professionals.”

He said the authority had discovered all the hotspot beach centres and that, they were going to deploy security personnel to regularly check on those places to ensure they adhered to the directive.

“Beach operators who fail to comply will be prosecuted because they are putting people’s lives at risk, people will definitely come to the beach but it’s up to the operators to restrict them from entering,” Mr Agyemang said.

He also added that “to individuals who would want to flout the directive and still come to the beach, these are not ordinary times, this is the time that we all need to come together and comply with measures to help fight this outbreak. We have to put the country first before any personal interest.”

Some bar operators at the facilities explained that they were aware of the outbreak but were not well-informed on the safety precautions.

A bar operator at Shining Beach at Nungua, Mr Eric Mensah, stated that “most of the education on this outbreak is being done on the television and radio, it will be better if they rather come here to educate us in the local language. This will help us understand the situation better and put up measures.”

The government of Ghana suspended all public gatherings in the country following the outbreak of the coronavirus disease (COVID-19) in the country.

President Nana Addo Dankwa Akufo-Addo said the directives followed an earlier meeting of the Inter-Ministerial Committee on coronavirus response which he chaired and led to deliberate on the issues.

Among the gatherings suspended were church services, weddings, funerals and other social gatherings.

Man dies in struggle with soldier over latter’s gun