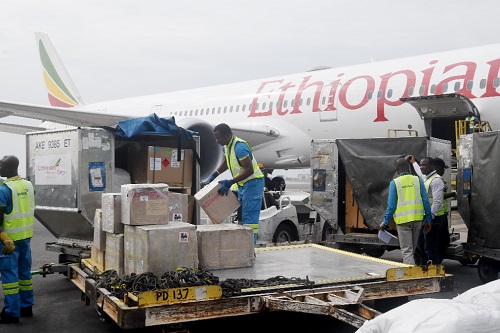 The Ministry of Health (MoH) has taken delivery of Ghana’s consignment of personal protective equipment (PPE) and COVID-19 test kits at the Kotoka International Airport (KIA) in Accra.

Donated by the Jack Ma and the Alibaba foundations, the items, made up of 20,000 laboratory diagnostic test kits, 100,000 medical masks and 1,000 protective suits and face shields, are to help the country deal with the spread of the COVID-19.

Help for Africa
The gesture from Jack Ma, a Chinese billionaire and co-founder of the Alibaba online shopping platform, is in fulfilment of a promise he made, through his foundations, to provide 20,000 test kits, 100,000 masks and 1,000 protective suits for each of the 54 African states as the continent also struggles to deal with the impact of the deadly disease.

The relief initiative was launched by the Prime Minister of Ethiopia, Dr Abiy Ahmed; the Jack Ma Foundation and the Alibaba Foundation as part of actions towards the implementation of the Africa joint continental strategy for COVID-19, led by the African Union (AU), through its Centre for Disease Control and Prevention (Africa CDC) in Ethiopia.

“We cannot assume this continent of 1.3 billion people will blissfully escape the crisis. The world cannot afford the unthinkable consequences of a COVID-19 pandemic in Africa,” Mr Ma said in a statement.

Other African countries which have received their share of the consignment, which landed in Ethiopia last Sunday, were Egypt, The Sudan, Eritrea, Djibouti, South Africa and Burundi

The Minister of Health, Mr Kwaku Agyeman-Manu, who received the items on behalf of government at the airport, thanked Mr Ma for promptly honouring his promise, which he had reiterated after talks with President Nana Addo Dankwa Akufo-Addo.

He described the delivery ahead of schedule as timely and commendable, as Ghana prepared to deal with more confirmed cases.

He also commended the Ethiopian Prime Minister and Ethiopia Airlines for their roles in ensuring that the items were delivered, and on time too.

Mr Agyeman-Manu indicated that apart from the equipment received from the Jack Ma Foundation, the MoH had taken inventory of 30,000 protective supplies, including masks and sanitisers.

He said the government had registered 18 companies in the country to produce sanitisers, for which reason there was no need for it to import sanitisers.

He also said a number of organisations had donated various sums of money and items to support the fight against the disease. They include the GCB Bank, which donated GHC100,000; the Church of Pentecost (COP), in collaboration with the Tobinco Group of Companies, which donated 50 sets of PPE and alcohol-based hand sanitisers worth GH¢45,000, and the Nursing and Midwifery Council of Ghana, which also donated 50 sets of PPE to the tune of GH¢25,000.

The Deputy Chief of Mission and Political Counsellor of the Chinese Embassy in Ghana, Mr Zhu Jing, commended the government of Ghana for its bold steps to slow down the spread of the disease in the country.

“Before the first case was confirmed in Ghana, President Nana Addo Dankwa Akufo-Addo had already set aside some funds and taken other measures to contain the disease,” he said.

He further said the Chinese government was concerned about the situation in Ghana and would assist with medical supplies and staff who would arrive in the country soon.

He said his government had sent huge quantities of medical supplies to more than 100 countries, especially in Europe, which is hardest hit by the virus.

Mr Jing said the Chinese Embassy was mobilising Chinese companies to donate medical supplies in the fight against the spread of the disease.

An official of Ethiopian Airlines, Ms Yemesrach Alemayey, who delivered the equipment, thanked Mr Ma and the Ethiopian Prime Minister for the donation and said the airlines was lifting the items in the spirit of Pan-Africanism.

Speaker responds to Minority's concerns on bipartisan approach to COVID-19

Galamsey: Let’s kill this monster before it kills us