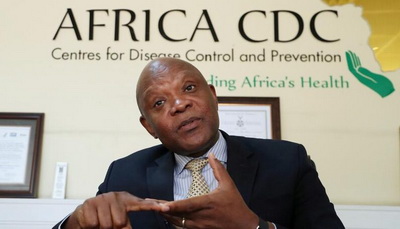 The African Union Commission (AU) is appealing to its member states not to repatriate other African nationals who may test positive for coronavirus while in their jurisdictions different from their home countries.

Rather, the Commission wants such persons to be treated just like any other patient of the disease in the countries they tested positive.

According to the Director for the African Centres for Disease Control and Prevention (Africa CDC) at the AU, Dr John Nkengasong, it would be out of place to repatriate such persons.

His comments followed the Government of Ghana’s indications to repatriate 10 ECOWAS nationals who tested positive for COVID-19 after being arrested and placed into mandatory quarantine in Tamale, in the Northern Region recently.

The Minister for Information, Mr Kojo Oppong Nkrumah, had on Sunday, March 29, 2020 given an indication that the ten would not be treated in Ghana, a decision many have described would rather put the lives of many others at risk of contracting the virus should they be repatriated.

“If a national of a member state tests positive in a country different from their home country, they should seek care in that country, and officials ought to engage with physicians on how to adequately manage the process of care,” Dr Nkengasong said.

Video Press Conference
Addressing journalists across the continent via video conference, he maintained that member states need to intensify their ability to test and detect patients, isolate them and find their contact to be monitored as containment strategies.

The AU, he said, has presently deployed an online platform in delivering training on laboratory diagnostics, surveillance, and infection prevention and control for member states due to travel restriction.

Similarly, the Africa CDC, he said is providing support to countries through the distribution of test kits and other logistics to assist in the care and treatment of patients.

Already, South Africa, he said had commenced using the mobile laboratories to test and identify those infected and isolate them as containment measures.

He stressed that the lockdown of cities across the continent identified as epicentres of the disease should come with the ability to quickly test people and find their contacts should such results return positive.

“You must have a good specimen system that you can supplement the mobile laboratories with so that the turnaround time for results becomes efficient so people do not become overly apprehensive,” Dr Nkengasong said.

He said that as the numbers keep increasing on the continent, “We need to bear in mind that the virus will find its way into vulnerable communities and sit itself there and that’s where you see it exploding and spreading further into multiple countries as witnessed in Europe and other places,” he said.

Commending governments in the affected countries for the lockdowns being implemented in cities where the infections are spreading, he said, such would go to minimise social harms.

The Director however, encouraged them to build local partnerships and let the communities understand the benefit of the lockdown.

“Create champions from the community, liaise with chiefs and opinion leaders, sensitise them and get them to understand the effects of the social distancing as a key proven method for controlling the outbreak,” Dr Nkengasong counselled.

Africa’s Own Vaccines
Asked whether Africa is looking at research solutions towards finding its own vaccines to cure the pandemic instead of always looking up to the international community for such, Dr Nkengasong said that, although some 30 candidate vaccines are undergoing trials, l’Institut Pasteur, located in Senegal which is Africa’s foremost developer of vaccines presently has no such focus.

However, he emphasised that there are groups that are looking into vaccines testing which require a coordinated effort.

The Coalition of Epidemic Preparedness and Innovation (CEPI), he said also has a variety of vaccines they are currently pushing through, “but regardless of who is producing it, we should not expect a vaccine within the next 12 months, that’s the unfortunate situation,” he underscored.

On the recent Anti-COVID-19 Fund established by the AU, Dr Nkengasong said that there are engagements ongoing for bilateral and multilateral support for the fund.

“There is an appeal for multiple partnership and they have seen a lot of goodwill expressed to support from bilateral and multilateral partners of Africa, but we need to see that those goodwill are being translated into concrete actions,” he pointed out.

Free electricity: ACEP wants govt to come out with plans of financing