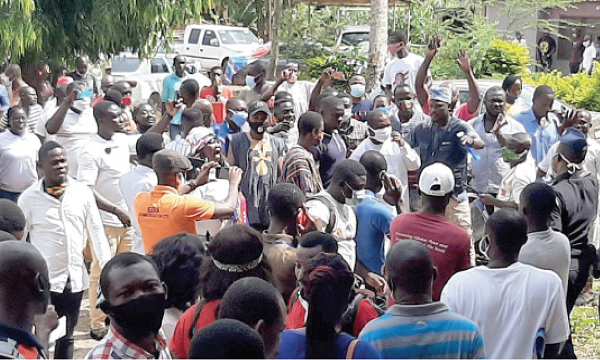 The country’s quest to organise a successful general election by observing the protocols of social distancing amid the COVID 19 pandemic was put to test last Saturday when the ruling New Patriotic Party (NPP) organised its primaries to elect parliamentary candidates for the December polls.

Successful as the elections went throughout the country, caution was completely thrown to the wind as supporters of the various contestants totally ignored the call for social distancing during the period.

Amid drumming, singing and dancing, the party faithful, particularly those belonging to the winning candidates, were seen in large groups, mostly exceeding the limit of 100 persons at a time in a place. Many of them were captured on video and still pictures shaking hands and hugging one another as they celebrated the victory of their candidates.

With the heavily armed police standing almost clueless, the people blatantly violated the directives for social distancing, a disturbing phenomenon which questions whether they will be able to enforce the President’s directive when the general election is held.

The development has attracted wide condemnations from all walks of life with political analysts on the day describing the scenes as unfortunate and failure on the part of the ruling party to ensure strict adherence to the rules.

According to them, with the sitting President coming from their party, it was necessary for the leadership to do all within its power to ensure that the rules were obeyed to give confidence to the rest of the people that the government was capable of keeping to its word when it comes to social distancing.

From the development, they were also of the view that, it will be unfair for such large gatherings to be tolerated when it comes to political activities.

It began well with all polling stations provided with water and soap for delegates to wash their hands before casting their ballot. Also observed was social distancing between the various points from where the delegates would check for their names in the register and the positioning of the agents of the contesting candidates.

Unfortunately, as the counting began and the results started trickling in, the confusion started and instead of the police jumping in to enforce the law, they rather stood aloof.

The media were also guilty of the breaches in the law as they also jostled for positions in their quest to capture the best of shots for their networks.

Instead of keeping to space provided for them, many ignored the protocols and moved closer to unauthorised places to get what they wanted.

The winning candidates in their excitement could also not restrain them as they violated the rules to grant interviews, often without their nose masks.

From Kumasi, for instance, Felix A. Baidoo reports that the primaries in the Ashanti Region exposed the country and threatened the fight against COVID 19 as the social distancing and wearing of nose mask protocols were hardly observed, especially during excited celebrations by supporters of winning candidates.

The massing up of supporters at the various collation centres to celebrate winning candidates was scary.

The nose masks were intermittently dropped, hugging and constantly shaking of hands to congratulate one another were common.

Indeed, the party had made provision for all the needed items including Veronica buckets, hand sanitisers, tissue papers and other protective materials, yet the supporters were carried away by the euphoria and simply forgot about the virus for that moment.

Surprisingly, the security personnel who were tasked to ensure strict adherence to the safety protocols could not control the crowd and just watched in awe.

From the Bantama constituency through to Oforikrom in the Kumasi metropolis, the security personnel had no choice but to allow the jubilant crowd to have a field day.

The scenario generated lots of discussions among journalists most of them fearing for their lives.

To some of them, if this scenario continue during the December general election, Ghana’s COVID-19 cases could escalate after the polls.

Manifest angrily replies a follower who call him a ‘Dada Ba’