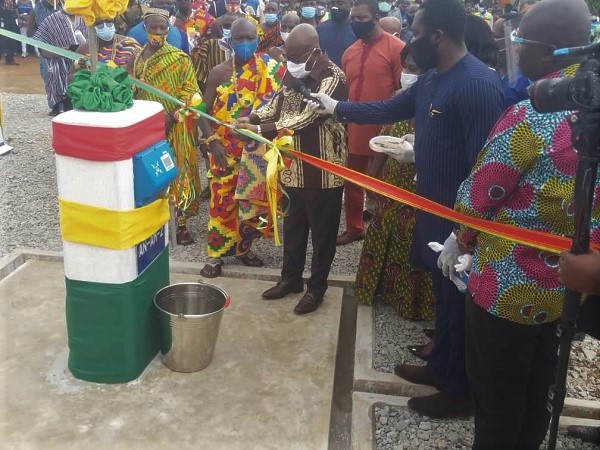 The GH¢73.4 million project, funded by the World Bank through the Community Water and Sanitation Agency (CWSA), in collaboration with the Ghana Water Company Limited, has increased the water coverage in the region from 63 per cent to 70 per cent.

It is part of the overall GH¢170 million water supply project across 11 regions in the country.

Two ceremonies were held at Amasamkrom, a community in the Mfantseman Municipality, and Gyeakrodua in the Awutu Senya West District to symbolically inaugurate the facilities.

A total of 146 communities in eight districts, including the Assin South, Abura Asebu Kwamankese, Mfantseman, Awutu Senya West and Gomoa West districts would benefit from the systems.

Others are the Asikuma-Odoben-Brakwa, Agona West and Ajumako-Enyan-Essiam districts.

The Sustainable Rural Water Sanitation Project started in 2017 includes the laying of 564.4 kilometres of pipes in nine clusters.

The project component also includes health and sanitation education, institutional development and the construction of 6,118 toilets for households.

He said through the Ministry of Water Resources and Sanitation, the government would also undertake the construction of 645 mechanised boreholes nationwide.

The President expressed the hope that investors would work to take advantage of the water projects to invest in the communities, create jobs and reduce poverty.

He also urged the CWSA to work to link the supply of water to support small-scale enterprises, particularly those under the One-District, One-Factory (1D1F) initiative, to promote local industrialisation.

President Akufo-Addo said the CWSA had recruited 1,152 professionals, including engineers and revenue staff, to manage the water resources and urged beneficiary communities to support efforts to maintain them.

He gave an assurance that his government would work to ensure the equitable distribution of resources to all communities of the country.

The President also commended the people of Amasamkrom for working hard to attain Open Defecation Free status and urged them to work harder to maintain the feat.

The Minister of Water Resources and Sanitation, Mrs Cecilia Abena Dapaah, for her part, said the government would continue to work to get water to all Ghanaians.

The Central Regional Minister, Mr Kwamena Duncan, said the government had in three years provided almost 10 per cent of the region’s population with water.

I lost my womb, when a doctor out of negligence did a poor job on my womb after delivery- Nana Yaa Brefo