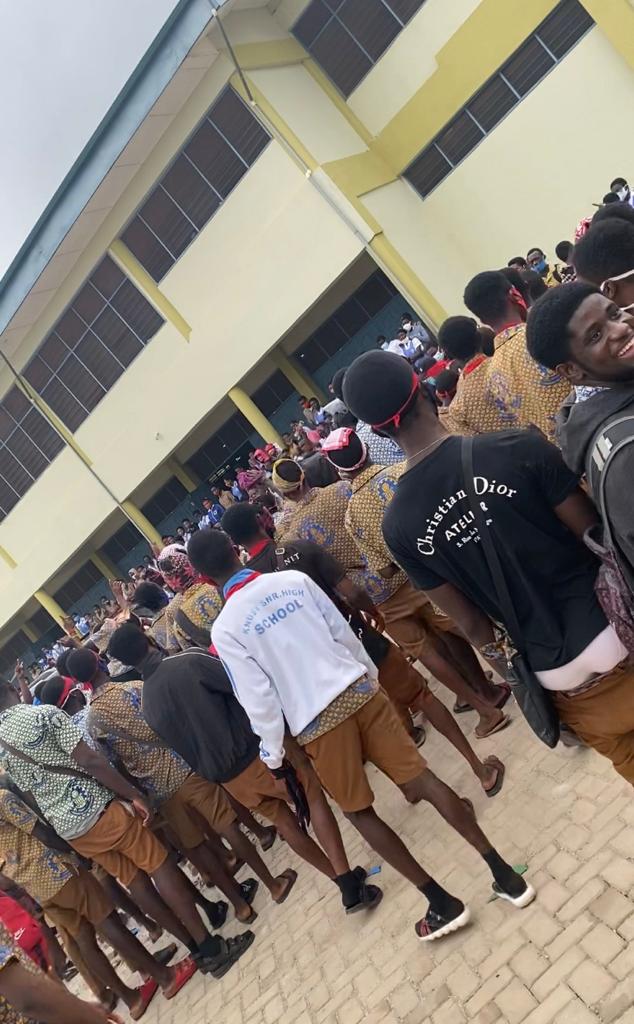 The management of KNUST Senior High School (SHS), the Ghana Education Service (GES) and the police on Wednesday morning locked themselves in a meeting over the death of a final year business student of the school.

Richard Leonard Sam died hours after he was sent to a medical facility after complaining of stomach ache last Monday, July 6, 2020.

On Tuesday, July 7, the students accused the teachers of ignoring the call for help by the deceased after complaining of severe stomach ache.

The teachers reportedly told his mates not to get close to him for fear of being infected with the coronavirus disease (COVID-19) and didn’t even attempt to offer him any help, the students alleged.

Watch the videos below

When news got to the school that the boy had died, the students went on a demonstration to protest the negligence of the school authorities which they said led to the death of their mate.

It took the intervention of the police to restore calm.

The protest on campus intensified around 6:30 pm on Tuesday, July 7, 2020, and even led to the destruction of property, the smashing of the windscreen of a vehicle.

Some of the students believed that if the authorities had acted promptly, Sam could be alive now.

They alleged that even his mates who brought him from the dormitory to the administration to seek for help him were punished for touching someone who could be a positive covid-19 patient.

GES and police move in to calm protest at KNUST SHS following death of student https://www.graphic.com.gh/news/general-news/ges-and-police-move-in-to-calm-protest-at-knust-shs-following-death-of-student.html

According to the students, when his colleagues brought him to the administration, they were simply asked to wear their face masks and leave him.

They claimed it was around 6pm that the deceased’s father came to pick him to the hospital.

On Wednesday morning, some parents thronged the school to pick up their wards but the school security wouldn’t allow them to enter.

The police responding by beefing up the security presence on campus to help quell any further action of the students.

Ada West: 3 in critical condition after robbery near Koluedor

Don’t think an African man can’t survive without you; he is self-sufficient and can perform those house chores you do better – Lady advises women

The most loyal people in any kind of situation, suffer the worst disappointments