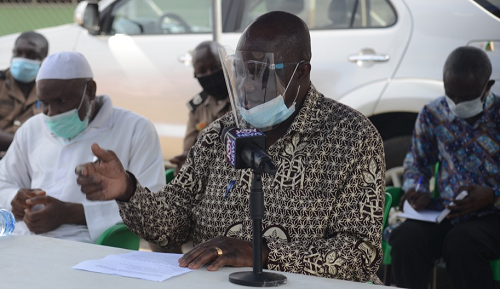 The Environmental Protection Agency (EPA) says it will arrest and prosecute any person who engages in open burning of electronic waste (e-waste) and other waste materials in the country.

This, according to the Acting Executive Director of the agency, Mr John A. Pwamang, will help to protect the environment from pollution and harmful substances emanating from the open burning of e-waste materials.

Speaking at a stakeholder engagement meeting on air pollution at Agbogbloshie last Tuesday, July 7, 2020, Mr Pwamang, said “We want to sound a warning to our brothers and sisters at Agbogbloshie and other parts of the country to refrain from open burning of e-waste and other waste materials.”

According to him, people who also engage in the burning of saw dust, coconut husks, lorry tyres to shin animal hides or recover wires, as well as those who burn refrigerator foams and plastic casings or electric motors so as to soften them to enable them remove copper will not be spared.

He said scrap dealers could sell electrical cables with the coatings on them without having to burn them, saying “there is absolutely no need to burn off the plastic coatings of cables.”

Mr Pwamang noted that many scrap dealers and other people engaged in indiscriminate burning of e-waste at night, pointing out that anybody caught in the act would be arrested and prosecuted.

He has, therefore, appealed to the members and the leadership of the Greater Accra Scrap Dealers Association (GASDA), the police, and the national security to assist in the prevention, arrest and prosecution of persons engage in the act of open burning.

He said following the passing of the Hazardous and Electronic Waste Control and Management Act (Act 917) by Parliament in 2016 and the launching of the Integrated E-Waste Management Programme for Ghana in 2018, it is unlawful for anyone to engage in any form of open burning.

Mr Pwamang explained that after Ghana launched its Integrated E-Waste Management Programme in 2018, the Minister of Environment, Science, Technology and Innovation signed an agreement with the Government of the Federal Republic of Germany for a project to support Ghana implement the Hazardous and Electronic Waste Control and Management Act (Act 917).

That, he noted, “One of the key components of this German supported project is to improve upon the collection, transportation and storage of electrical and electronic wastes in Ghana using the Greater Accra Region as a pilot.”

He noted further that a buy centre had been established and that electrical and electronic wastes “are being purchased at very competitive prices.”

Mr Pwamang said EPA would continue to work with its partners such as the GiZ, KfW and the Green Advocacy Ghana to get space for the storage of the plastic casings and fridge foams.

The Greater Accra Regional Secretary of GASDA, Mr Mohammed Ali, pledged the support of the association for the move to stop open burning of e-waste in the country.

He said the practice did not only pose health risk to residents living around where such activities took place but also to the very people who engaged in the act.
“As scrap dealers, we don’t have any excuse to do the burning,” he said, adding “we are ever ready to comply with EPA.”

The Executive Director of the Green Advocacy Ghana, Mr Yaw Amoyaw-Osei, said through the activities of the NGO, it has been able to restore some level of sanity in the open burning menace at Agbogbloshie.

He said the NGO has conducted many studies about the impact of the open burning in the area, noting that there was an urgent need to stop the practice since it poses a lot of health risk to the residents in the area.

He, however, expressed the worry that in spite of the various studies conducted on the practice, little has been done to prevent it, leaving the situation to deteriorate.