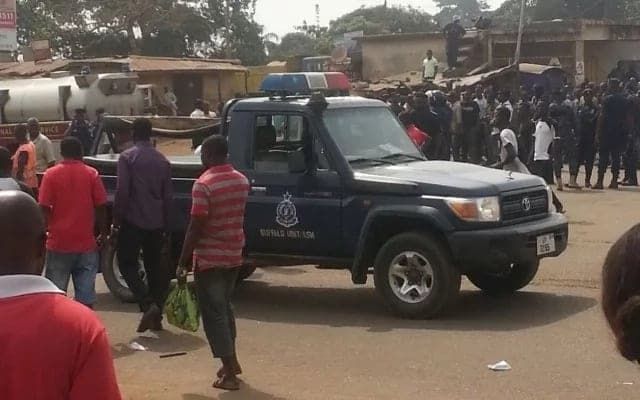 Tension is brewing between the Abossey Okai Spare Parts Dealers Association (AOSPDA) and their Nigerian counterparts over the participation in the local retail market by foreigners in violation of the provisions of the Ghana Investment Promotion Centre (GIPC) Act, 2013 (Act 865).

While the local spare parts dealers have started locking up shops belonging to foreigners, the Nigerians have also vowed to resist the action with all the energy they could muster.

The development has created tension in the area, with fears that it might erupt in violence. The law Section 27(1) of Act 865 states that: “A person who is not a citizen or an enterprise which is not wholly owned by a citizen shall not invest or participate in the sale of goods or provision of services in a market, petty trading or hawking or selling of goods in a stall at any place.”

In spite of the law, Ghanaian traders have had the cause to express concerns over the lack of enforcement and subsequent infiltration of the local retail market by foreigners.

Lock-ups and arrest Peeved by what they described as “unlawful takeover” of the spare parts business, the local traders locked up about 100 stores belonging to the foreigners last Tuesday evening.

The development sparked tension in the area leading to the arrest of three leaders of the association by the Kaneshie Police for taking the law into their own hands.

The three leaders — a co-Chair of AOSPDA, Mr Sammy Siaw; the Vice- President of the Ghana Union of Traders Association (GUTA), Mr Clement Boateng, and the Public Relations Officer (PRO) of AOSPDA, Mr Francis Anom Boateng — were picked up by the police at 9 p.m. on Tuesday and granted bail Wednesday.

The arrest of the leaders heightened the agitation among the local traders who vowed to go all lengths to get all foreigners whom they said were operating illegally, out of the retail market.

Tense atmosphere When the Daily Graphic visited the spare parts business centre at Abossey Okai at about 9:30 a.m. yesterday, the local traders had mobilised to go and lock up more stores belonging to the ‘foreigners’.

They were clad in red and black attire and chanted war songs to demonstrate their misgivings about the failure of the state to protect their businesses from foreigners as required by the law.

The deployment of the police to the area prevented further locking up of the shops belonging to Nigerians. At a press conference, the AOSPDA members expressed disappointment in the state institutions, especially the GIPC and security agencies, for failing to enforce the provisions of Act 865 over the years.

Mr Anom Boateng, who addressed the press, said the association had decided to lock up the shops belonging to foreigners because the mandated state institutions had failed them. “We have waited and watched over the years the negligence of the relevant state institutions to enforce the GIPC Law (Act 865).

We the AOSPDA have taken it upon ourselves to make sure that the GIPC Law is implemented and we will go all out to do it,” he emphasised.

Mr Boateng called on the National Security, the Police, the Bureau of National Investigations (BNI) and the GIPC to strictly enforce the law to protect local traders.

Meanwhile, the President of the Nigerian Traders Association, Mr Emeka Nnadi, described the action of the Ghanaian traders as unlawful and asked all Nigerian traders to protect their businesses from being taken over. He said the Nigerian traders would resist attempts by GUTA and the spare parts dealers to intimidate them and take them out of business.

“I am tired of staying in this country; and this illegality must stop. We are tired; where do they want us to go?” he fumed, while speaking to journalists.

How do you donate future salary when we need money to buy PPEs now? Mahama throw shades

‘What benefit has your Hip-Life been to Ghana? Before you came to rap there were plenty rappers already in Ghana’ – Shatta Wale ‘disses’ Reggie Rockstone